NEWS ALERT All Our Relations 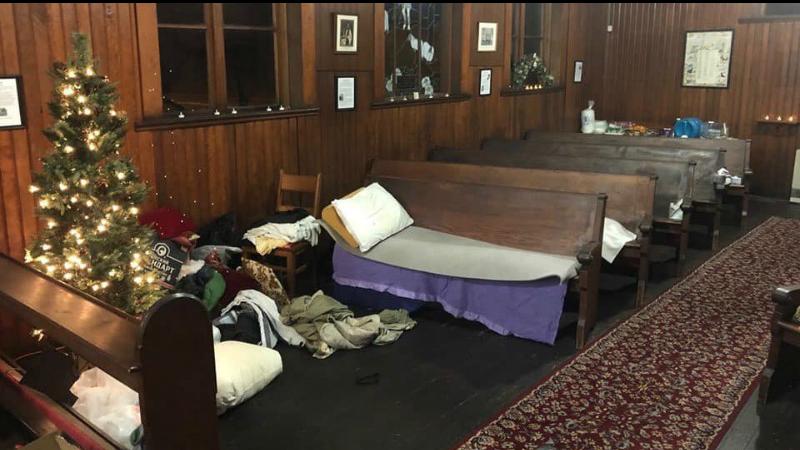 Pews at St. Anne church were transformed into beds for the less fortunate in the Oceanside region over the weekend and will continue to do so this season. (Adam Fras/Facebook)
By Spencer Sterritt
OPEN DOORS

NANAIMO — A Parksville church is filling the need for a cold weather shelter in the Oceanside area as work is done behind the scenes for a more permanent and suitable location.

St. Anne’s Church, which is 125 years old this year, hosted its first “pray and stay” vigil on Friday, Dec. 6. The doors opened around 6:30 p.m. and people were welcome to sit, rest and eat until 7:30 a.m. The vigil continues every night at the church, which is Vancouver Island’s oldest.

It’s not considered a cold weather shelter and doesn’t have the full suite of staff and amenities a more permanent location would provide.

However, priest associate Christine Muise told NanaimoNewsNOW it still managed to bring people together in a positive way.

“I think it’s answering a need that’s current,” she said. “My real hope is…all levels of government and social services agencies can come together to really create better options for housing and caring for those who are on the margins and have no safe place to rest their head.”

The first night of the vigil marks Muise’s 11th anniversary of becoming a priest in the Anglican Church of Canada.

She was ordained on Dec. 6, Saint Nicholas Day.

One legend of Saint Nicholas, who is believed to be the origin of Santa Claus, is he left gold in the boot of a struggling father to not have to resort to selling their daughter to survive.Muise said the generosity to keep the family from a life of destitution, violence and suffering is a key moral at the heart of the pray and stay vigil.

Volunteers supporting the pray and stay vigil are now seeking donations, specifically for soft surfaces and blankets to make the hard pews more comfortable to sleep on.

The church will continue holding the vigil while the Homelessness Ecumenical Advocacy Response Team works to establish a more permanent cold weather shelter in the Oceanside area.

A cold weather shelter previously existed in the basement of Arbutus Grove Church, but it wasn’t sufficient to handle the overwhelming need in the area.

The 52-unit, provincially-funded supportive housing facility in Parksville which opened this year was to have an eight-bed cold weather shelter, but the option was removed at the behest of Parksville’s city council.